Our customer support team is here to answer your questions. Ask us anything!
Hi, how can I help?
Hi, how can we support you?

WELCOME TO CAPETOWN iT SUPPORT 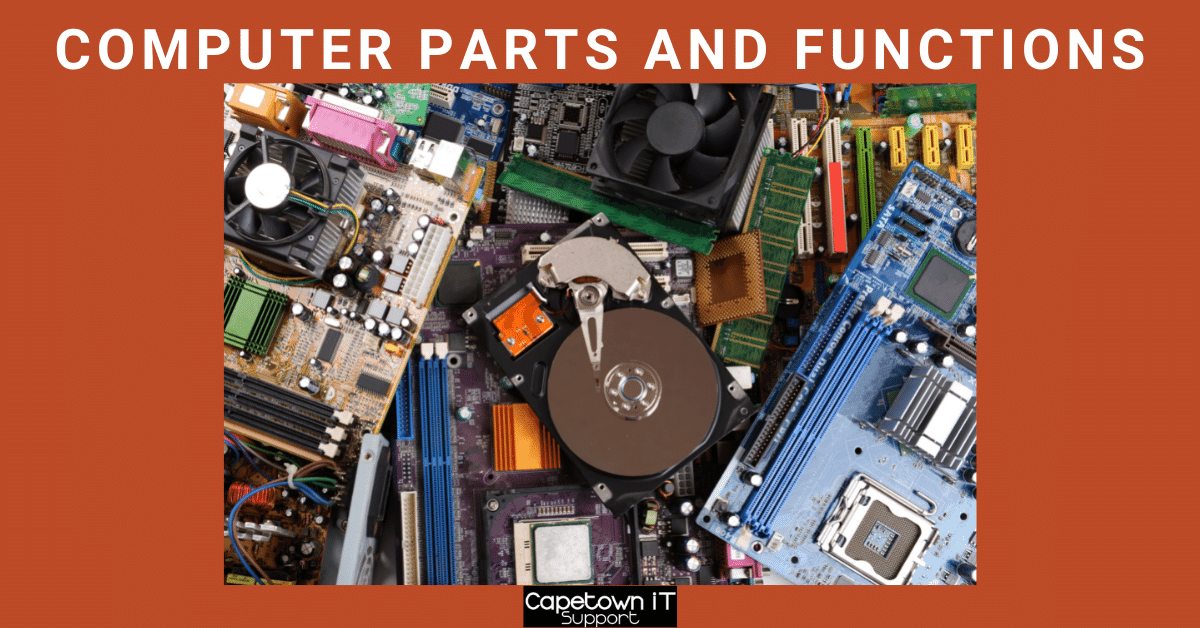 Computer Parts: The Basic Components of a Desktop Computer

A computer is a machine programmed to store and process data.

For anyone owning a computer, knowing the computer parts or components of your device is beneficial in times of slow performance or when you want to update a certain component of your computer. Working from the outside in, this article will discuss the 10 major parts of any desktop computer.

One of the most important PC parts is the monitor which displays images and text. It works with a video card which we’ll discuss later on. Some monitors have buttons that allow you to alter display settings to your desires and some have built-in speakers.

Often called the computer chassis, the computer case is the enclosed case that holds most of the inside components of a PC. These include the motherboard, CPU, and power supply.

Computer cases vary in shape, size, and build. While desktop cases sit on desks and often have the monitor on top of them, tower cases sit next to the monitor.  Some desktop computers have inside components built into them, executing the need for more space.

In computers, input computer parts are very crucial. The keyboard is one of the main input devices with a computer. A keyboard is made up of different letters numbers and symbols that we use to communicate with the PC. The horizontal rows of keyboards have different names, including the home row keys, top row keys, and bottom row keys.

Although keyboards can look very different, they all perform more or less the same primary tasks.

The mouse is used in tandem with the keyboard as an input device. It is a handheld piece of hardware that we use for clicking, dragging and dropping, and pointing. With desktop computers, the mouse is placed on a flat surface, however, with laptops a mouse is built into the laptop as a touchpad. Another variation of the mouse is the trackball that has a ball that you can rotate with your thumb to move the pointer.

Related: Cost to Repair a Laptop

A computer’s high-definition media input is what is used to connect the device to external media output such as a different monitor or television screen.

The CPU has a direct plug connection to the motherboard and communicates with all other computer components. This PC component is where all of the work gets done. The CPU fetches, decodes, and executes instructions that it gets from software downloaded on the PC, or from data the computer gets from the cloud.

The hard drive is the computer’s long-term memory. It stores all of the data on your PC, from files to software. Modern computers have an internal hard drive which could be a mechanical drive that spins such as a Hard Disk Drive (HDD) or a Solid State Drive (SSD) which is a more modern type of long-term storage device.

Unlike the hard drive, the RAM (random access memory) represents a computer’s short-term storage. The RAM is where the data in current use are stored for quick access by the processor. Since it is focused on storing current data, RAM cannot store long-term data.

It is common to hear gamers obsessing over the newest graphics card. That is because these cards are responsible for generating high-end visuals. Graphics cards are also useful to those who rely on quality displays, such as 3D modelers or video editors.

Note that graphics cards and monitors work together, one can’t be high quality without the other being high quality as well. This means that buying a really expensive graphics card won’t be of many benefits to you unless it is connected to a high-end monitor.

Check our Hardware Upgrade and Installation

Hopefully, this article did well to explain the key components of a PC. If you feel that any of these components is lacking in performance in your PC contact CapeTown IT Solutions.

Pin it For Later